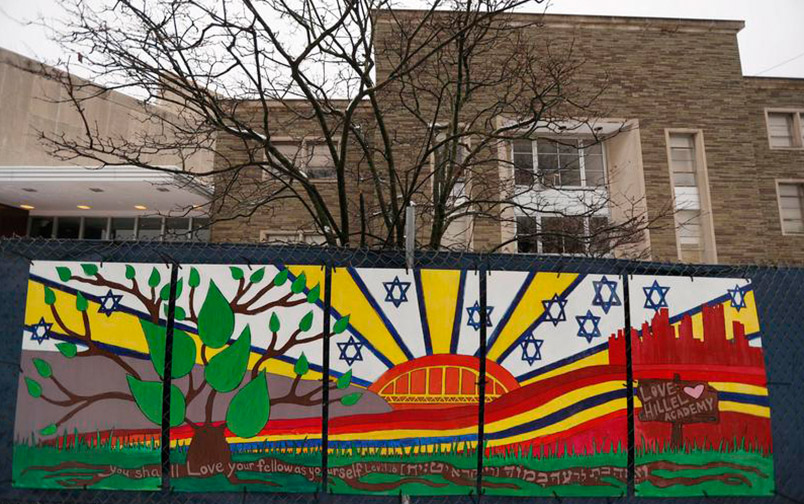 Tree of Life, Dor Hadash and New Light Congregation are saying thank you to first-responders, the people of Squirrel Hill and well-wishers beyond with a neighborhood beautification campaign, #HeartsTogether: The Art of Rebuilding. In the wake of the mass shooting of October 27, 2018, which claimed the lives of 11 Jewish worshippers, the Tree of Life synagogue building remains uninhabitable and bounded by a chain link fence and blue tarps along its Wilkins Avenue expanse.

The three congregations invite young people (between the ages of 13 and 17) throughout the world to create and submit original, uplifting images and graphics, to be printed on windscreens to cover the fence at the synagogue site while plans for the building are being considered and then implemented. Art received may exceed the capacity of the windscreens, but all appropriate submissions will be accessible in an online gallery. Submissions will be accepted through May 31, 2019; instructions can be found on the Tree of Life webpage, www.tolols.org/heartstogether.

#HeartsTogether will replace the tarps with a sidewalk gallery of original artwork expressing sentiments such as gratitude, love, community, hope, healing and resilience.

Tree of Life board member, Laurie Zittrain Eisenberg, explains, “We regret that our site appears vacant and unkempt in the midst of this wonderful neighborhood that showed us so much love. We want to say thank you by transforming this temporary condition into a thing of beauty and reflecting back to our neighbors, the city and the world, all the strength and positivity which we received from them in our darkest hours.”

Congregations New Light and Dor Hadash, which held services in the Tree of Life building and also lost members in the attack, enthusiastically support the campaign, which will help to beautify the site while future plans for it are under review. The fence wrap around the property will convey gratitude for the love and support received from millions of people in the wake of the tragedy.

Stephen Cohen, Co-President of New Light Congregation, adds: “Until we can return to our home inside the Tree of Life building, we want the site to reflect the beauty and love that people throughout the world have shown to us. With our hearts together we want to visually express our thanks to all.”

Ellen Surloff, immediate past president of Congregation Dor Hadash, remarks, “I can think of no better way to beautify the site of this senseless tragedy. We eagerly await the submissions, every one of which will be a welcome and cherished reminder of support from around the world.”

The three congregations made international headlines on October 27, 2018, when 11 worshippers were killed and seven people, including five first responders, injured during a mass shooting by a white nationalist gunman at the Tree of Life synagogue building. It was the deadliest attack on the American Jewish community in the history of the United States. Since then, tremendous outreach, love and support has arrived from around the world, helping the congregations begin to rebuild and move forward. For more information, please visit www.tolols.org/heartstogether.