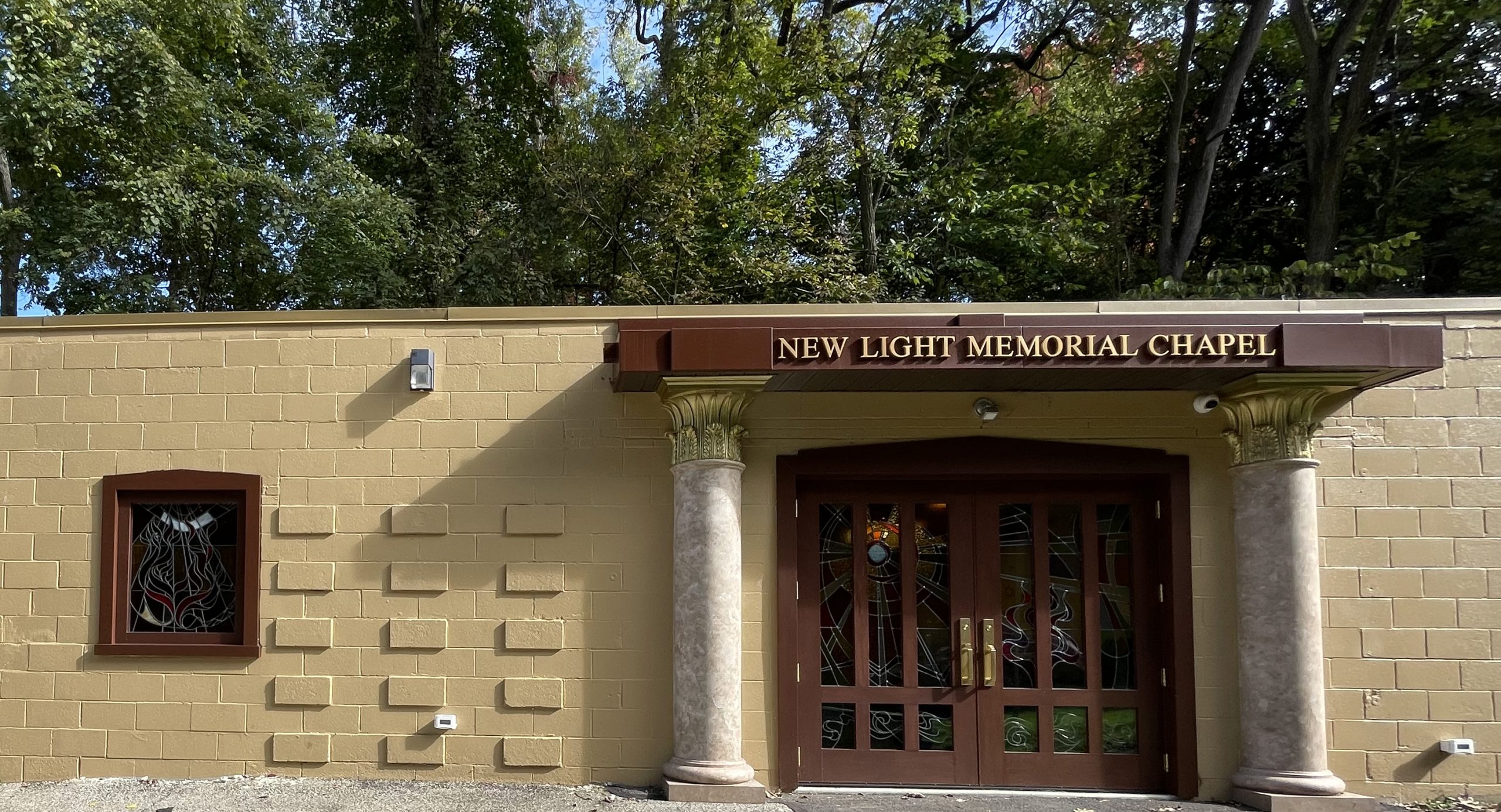 On October 27, 2018, eleven individuals from three Jewish congregations were killed during Saturday morning services. Three of those killed – Richard Gottfried, Daniel Stein and Melvin Wax – were members of New Light Congregation. The Memorial Chapel is New Light Congregation’s deliberate, thoughtful and proactive measure to remember, honor and memorialize the events of that day on sacred ground, the site of the New Light Cemetery. Just as God commanded Joshua to erect 12 large stones “to become a memorial forever” as the isrealites crossed the Jordan River after 40 years in the desert, it is our duty and obligation to ensure that there is a “stone” that later generations can stand upon and measure. 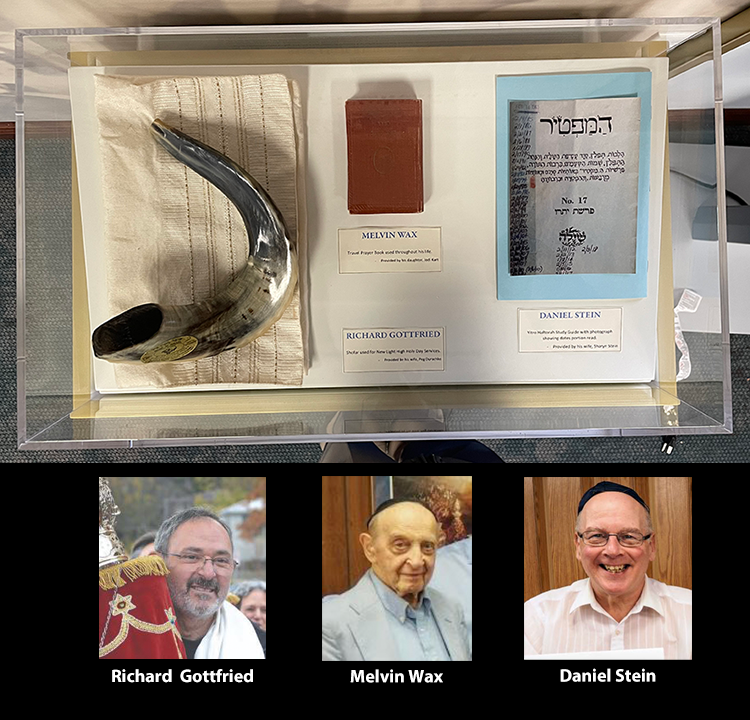 New Light has always been a small, closely knit congregation. We are family. Family held together by our love for one another and bound by the weekly rituals of Shabbat. Like many of the victims that day, Rich, Dan and Mel served as the religious heart of New Light. They led services, read Torah and Haftorah, led our choir on the High Holy Days, and blew the shofar through the months of Elul and Tishrei. They were our leaders for the most important aspect of congregational life – the rituals. Rich, Dan and Mel were our glue for many, many years. Even now, we struggle to fill their shoes.

The Chapel also honors and remembers the other eight martyred victims. May their memories forever be a blessing.

It is fitting that these Memorials are part of the New Light Cemetery; filled with monuments to the many New Light families who have passed since the inception of the Congregation in 1909.

The Torah portion, Genesis 21:1 – 22:24 (“Vayera”), was not read that morning. In honor of those that perished, we dedicate the entry door and exterior window to the themes of that portion: the banishment of Hagar and Ishmael and the binding of Isaac. Read the Torah portion. 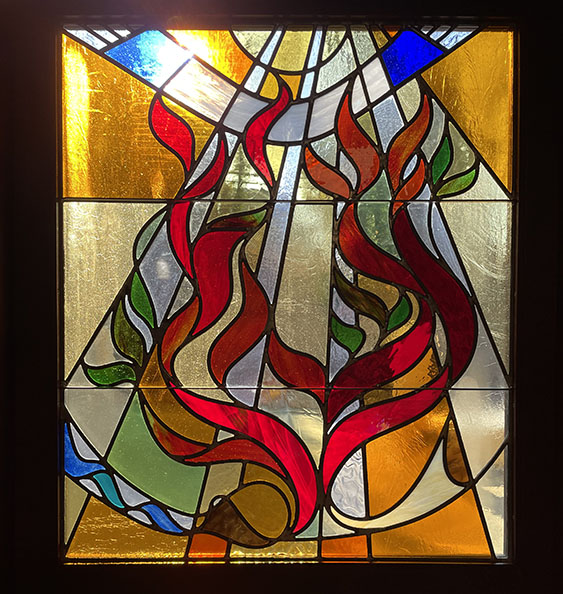 God is symbolized by the rays of light flowing through the tallit at the top of the window, opening Abraham’s eyes to the ram and Hagar to the nearby well.  The red bush lies at the heart of both the story of Abraham and Haggar.

Abraham found that God placed the ram caught by its horns in the bush; he offers it as a burnt offering instead of his son Isaac.  One lesson is that Abraham was prepared to make the ultimate sacrifice of his own flesh-and-blood and that God credited it to his merit. The shofar represents the ram and  also the promise God  made  to Abraham to multiply his seed.

The bush also served as a shelter for Hagar’s son, Ishmael, when he was sick with thirst in the desert until God revealed the well to Hagar so she could fill the pouch with water so they both could live. 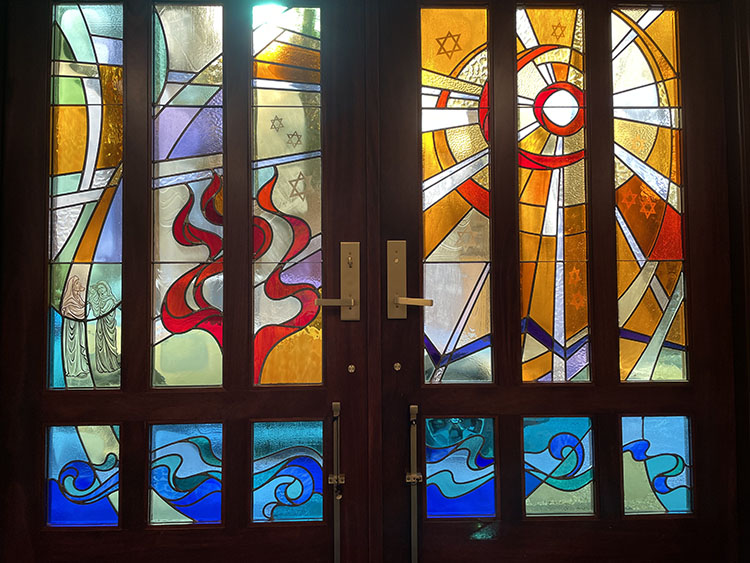 The brilliance of the Sun (right) – Oher Chodosh/New Light (“A New Light will shine on Zion”) –  refers to the redemption of the Jewish people and the ingathering of the exiles as it breaks through the darkness of tragedy (dark jagged line).

The figures of Abraham and Sarah holding Isaac (lower left corner), represent the “Promise of the Covenant.”

The Lord tells both Abraham and Haggar to “lift up their eyes”. In the red bush (left) Abraham finds the ram to sacrifice in place of Isaac. Note the pieces of sacrificial animals in the bush. The flowing waters (bottom) represent Hagar and Ishmael receiving water at the well in the desert. 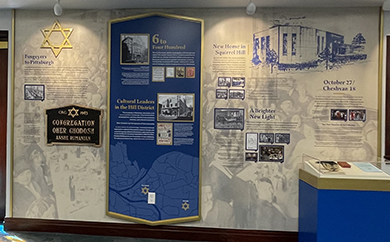 This Chapel serves as a historical record of the Congregation. Our founders came from small villages in Romania to escape anti-semitism. They formed what became in the 1920’s and 30’s the leading shul in Pittsburgh’s Hill District. Its members formed small and large businesses and led the renaissance in Jewish theater in Pittsburgh

The Congregation moved to Squirrel Hill in 1955, where it acquired property on the corner of Forbes Avenue and Beechwood Blvd. We currently rent space in the Beth Shalom building on the corner of Beacon and Shady Avenues.

For several years, New Light Congregation has worked with the Rauh Jewish Archives at the Heinz History Center, to create a historical record of the Congregation. Visit their site to view some of the highlights of that endeavor.

The Chapel is only one part of our Memorial. In the cemetery itself, at the top of the hill, stands a monument and bench specifically dedicated to our holy martyrs: Richard Gottfried, Daniel Stein and Melvin Wax, may their names forever be a blessing. The Callery Pear Tree stands guard next to the bench. 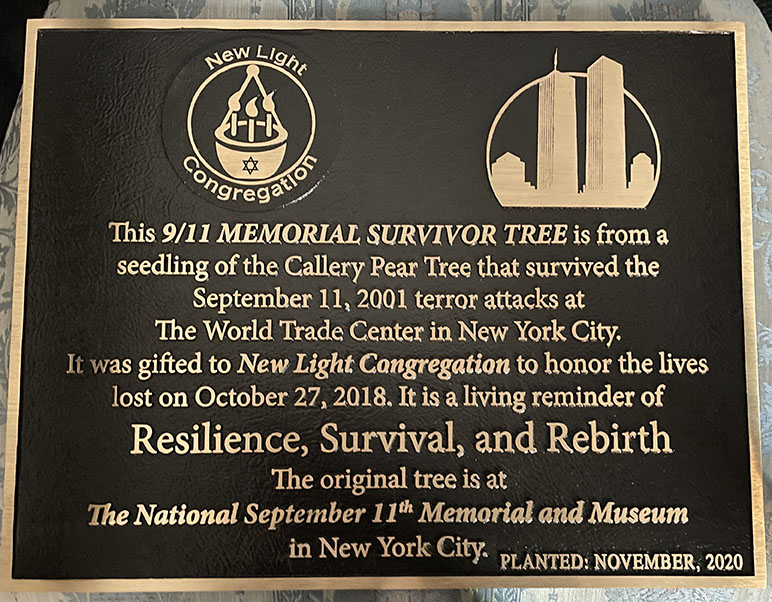 A Callery Pear Freedom Tree donated by the National September 11th Memorial and Museum in New York City. The tree is a cutting from the only living tree to survive the collapse of the twin towers in New York City on September 11, 2001. This plaque will soon stand next to the tree.


To visit the Memorial Chapel, please go to this page.