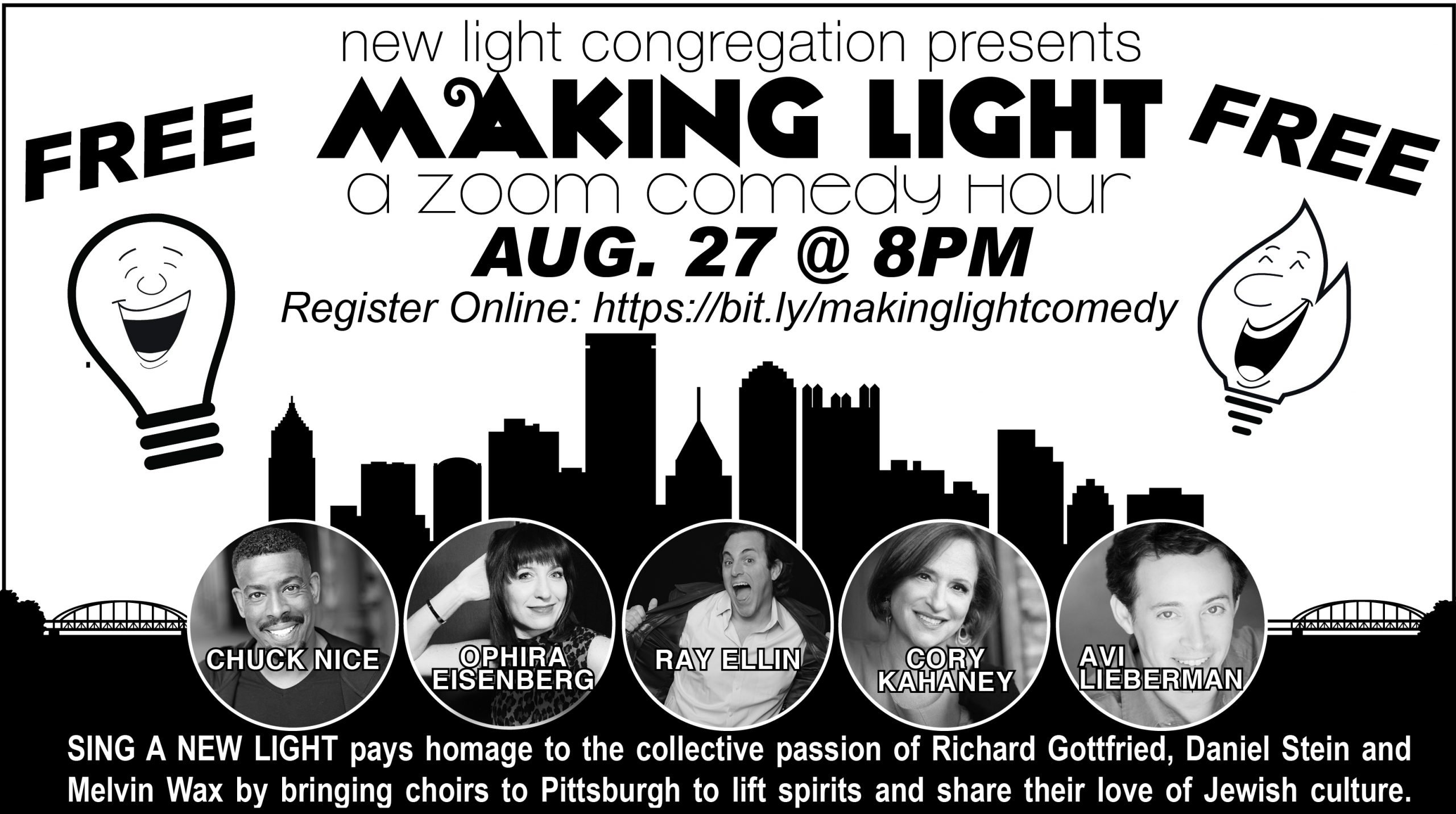 This event has ended

New Light Congregation announces a second concert in the SING A NEW LIGHT series “Making Light: A Zoom Comedy Hour” scheduled for Thursday, August 27th at 8PM, honoring the victims of the Synagogue shooting on October 27, 2018. In this difficult time when public events are on hold, what better way to celebrate than to laugh – and cry. Making Light brings together five leading comedians to lighten our mood and celebrate the future.

I Need a Laugh!!! Register Now!

The series honors the memory of the three New Light members killed in the mass synagogue shooting on October 27, 2018: Richard Gottfried, Dan Stein and Mel Wax. Dan and Rich for many years were the heart of the New Light choir. SING A LIGHT pays homage to their collective passion by bringing choirs and other entertainment to Pittsburgh to lift spirits and share the love of Jewish music.

Ophira Eisenberg. Ms. Eisenberg (is a Canadian comedian, writer, and actress. Originally from Calgary, Alberta, Eisenberg hosts the weekly NPR and WNYC trivia, puzzle, and game show Ask Me Another. She has appeared on the Late Late Show with Craig Ferguson, Comedy Central’s Premium Blend.

Cory Kahaney, an American comedian, has competed in the first season of NBC’s reality television show Last Comic Standing as a grand finalist. After making five appearances on CBS’s The Late Late Show with Craig Ferguson, she finally made her debut on the Late Show with David Letterman. She has had her own comedy specials on both Comedy Central and HBO.

Ray Ellin performs at top comedy clubs around the United States. He hosted and wrote for the syndicated shows The Movie Loft, Premium TV, New York Now, and BrainFuel TV. He also hosts the ground-breaking web-based talk show LateNet with Ray Ellin.  Ellin produced and directed the film The Latin Legends Of Comedy, In 2011, Ellin became the host of the Gong Show Live, a resurrection of the iconic television show. In 2012, he became the host of the new television show Worth The Wait.

Chuck Nice is an American stand-up comic and radio personality from Philadelphia, Pennsylvania, where he started his career hosting a show atop a new-wave dance club The Bank. He is a frequent contributor to VH1’s Best Week Ever and truTV’s The Smoking Gun Presents: World’s Dumbest…, and performs regularly at the HA! Comedy Club, and Comic Strip Live in NYC. He often co-hosts the TV show and podcast StarTalk alongside astrophysicist Neil deGrasse Tyson, and has also been the most frequent co-host on the TV adaptation. He is also currently the host of the Top 10 Countdown that airs weekly on the Centric Network. He also hosts HGTV’s Buy Like a Mega-Millionaire.

Few comedians are better at entertaining at a Jewish function than Avi Liberman. Aside from the vast content he has pertaining to Jewish life, he is also Israeli which allows him to do much comedy material with Israel content. Having performed at synagogue, Federation, JCC, and Hadassah events throughout the US, and, as the creator of the Comedy for Koby sold-out performances in Israel, Avi is a perfect fit for any event relating to Israel. The documentary made about Liberman and Comedy for Koby has recently had its World Premiere and will soon be seen widely.

SING A NEW LIGHT is a joyful musical series of Jewish college a cappella choirs and other entertainment groups from around the country engaging both New Light Congregation, the Pittsburgh Jewish Community and the general public in musical (and comedy) celebration.

I Need a Laugh!!! Register Now!

Your cart is empty